There’s no question that Oakland mixes up the good and bad, and air quality falls in this camp too.  You can breathe fresh air in the hills, and smog isn’t part of our language.  If you are near the industrial zones or freeways, then expect to take in a more toxic stew.

Industrial pollution is impacting the health of Oaklanders. Take a look at this Alameda County Public Health Department (ACPHD) map from last year, showing asthma emergencies.   The darker colors show the worst rates for kids, and you can see the absolutely worst areas surrounding the Port of Oakland – at two to three times the rate of other places. 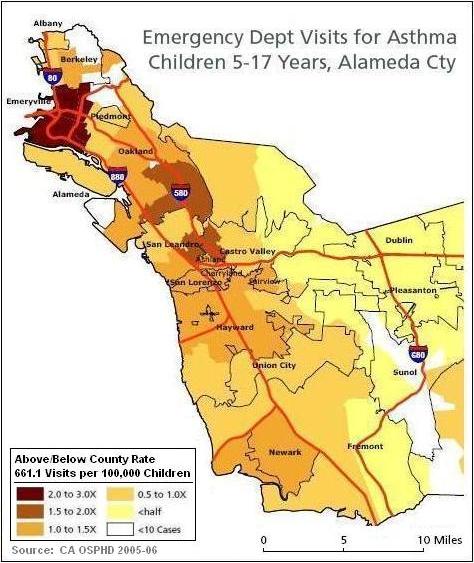 According to an Alameda County study, the pollution impacts West and North Oakland residents over the long haul.  Research shows there’s a 2.5x greater lifetime risk of  cancer for these Oaklanders versus all Bay Area residents.

The study claimed that 71% of the risk comes from truck traffic and that residents breathe three times more diesel particles.  In West Oakland alone, researchers concluded that risks could be as high as five-fold indoors and nine-fold outdoors.

Not surprisingly, more people living below the poverty line also live closer to the pollution.  About twice as many poor live within one mile of toxic release sites (13.4%) than 2.5 miles away (7.4%).  The pollution is visible to local kids, who are learning that soot at home comes from Port activity.

The connection between children’s health and nearby pollutants is well-documented, and the California Legislature even passed a law prohibiting new school construction closer than 500 feet from roads with 100,000+ vehicles daily.  That’s a good start, but where does that leave Oakland today?

What Should Be Done?

Alameda County health officials have proposed a series of fixes, and some seem quite plausible.  Truck traffic could be controlled better, by eliminating trucks in residential neighborhoods and enforcing no-idling laws near schools.  Additionally, the schools near freeways could be retrofit with heating and ventilation system upgrades if funded.

Of course, there are bigger picture recommendations from the health officials which seem beyond scope.  Shippers and truckers should be focused on reducing their emissions, though the green incentives and approaches are tough for Oakland to tackle on its own.

It’s a difficult balancing act.  The Port of Oakland is an important part of our economy, which means we generally welcome the truck traffic through the city.   Yet the health impact on nearby residents is undeniable, and we must figure out how to be kinder and gentler – we don’t live in the Third World.