Have you ever watched an Oakland City Council meeting, on cable, computer or in person?  Have you managed to watch an entire meeting, often lasting until midnight?

With Sanjiv Handa always present, you expected the meeting to include detailed harangues from this Oakland activist-journalist.  Most citizen speakers would sign up for a single card, address City Council for a minute (or two if a friend donated one), and stick to the topic at hand.  By maximizing allowable speaking opportunities, Mr. Handa managed to corral significantly more microphone time. 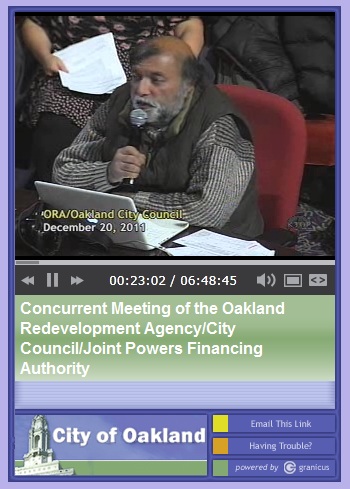 Handa, who identified himself as head of the East Bay News Service, would comment on parking, agenda notifications, sunshine laws and all types of procedural break-downs in City Hall.  He was an expert and relished his detailed understanding of protocols.  If you actually listened to the words rather than the style of this messenger, there were always a couple nuggets of learning from each Council meeting.

Over the years, Handa maximized his comments and played by the rules.  Oakland City Council reps found him so irritating that they changed these rules to limit individual speaker times at each meeting.  Handa complied and still seemed to have the pulpit even with limitations.  At the December 20th meeting, he reported about the Port of Oakland’s traffic on December 12th.  He was focused until the end, both uncovering and sharing facts.

Today the messenger died, after decades of voluntary devotion to city happenings and governance.  There was timely coverage from the Oakland Tribune and the Associated Press.  What tickled us the most was Mayor Jean Quan’s reaction, when she declared “there will never be another Sanjiv Handa.”

For those of us who never knew him personally, we knew him anyway.  Handa seemed like the unelected council rep who was reliable, always had something to say — and made you laugh, cry or grit your teeth.  Go ahead and watch an archived KTOP video, and you can’t miss him.  I think Council meetings will be very different indeed.  Mr. Handa, please R.I.P.

Earlier today, several Oakland policemen caught three criminals who were trying to escape from our neighborhood.  The police said they would respond to crimes underway, and lived up to their promises — even though the department remains grossly understaffed. 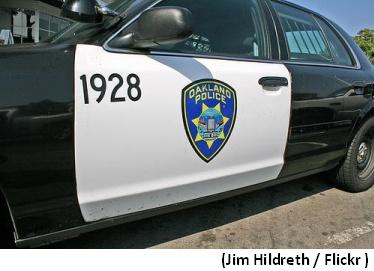 One eyewitness posted this report, on Montclair’s Yahoo board:

Passed by Thornhill and Mountain at 11:45 today and 6 police cars had a car surrounded at the traffic light. On the trunk of one of the police cars was someones nice flat panel TV and the police were taking fingerprints off it.

According to Carolyn Winters, who chairs the Montclair Safety and Community Council (MSIC), three burglars were arrested after breaking into a home on Merriewood Drive as well as one other location.  And there was some drama, as one of these burglars “ran the wrong way” down Highway 13 before getting captured on Fernwood!

While we’re not thrilled about the crime, at least the bad guys were apprehended.  Be thankful.

It looks like the City of Piedmont will likely approve development of Blair Park, possibly tomorrow night.  This five-acre undeveloped area, located in Piedmont with an Oakland border, has been under review for several years now.  Some Piedmonters want more space for playing fields.  A mix of Piedmonters and Oaklanders are still concerned about traffic, environmental, seismic, sound and other impacts. 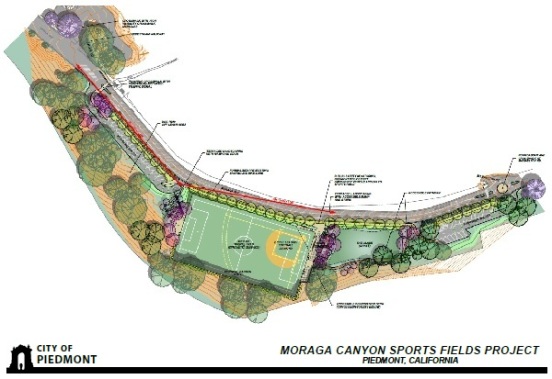 During this past year, there have been revisions made to the Master Plan.  Most notably, the plan calls for one synthetic playing field rather than two fields.  The remaining space would be filled with a grass glade, a restroom, an off-leash dog area, and two parking areas for 20 cars.  There would be lowered concrete walls, new sidewalks, and some traffic calming efforts.

Piedmont City Council has scheduled a public hearing tomorrow night, to hear comments about the latest plan.  More specifically, the Council will be considering approval of this 65-page addendum to the final environmental impact report (FEIR).  The agenda calls for reviewing overall conditions to approve/deny the project or parts of the project.

In addition to the environmental review and mitigation program, the Piedmont City Council is also addressing other approval conditions.  These range from financial arrangements, such as leasing the site to the developer and getting initial fees paid, to making sure construction costs, plans and schedules are hammered out.

Tomorrow’s agenda covers both Blair Park and existing Coaches Playfield elements, Blair Park modifications proposed by the Piedmont Recreational Facilities Organization, filing the project with the Alameda County Recorders Office, and reading of an ordinance about leasing the Blair Park site to the developer.

Based on the agenda alone, it sounds like the train is about to leave the station, the starting gun will be shot — or pick the metaphor that works best for you.  Assuming there’s money to develop Blair Park, some development is about to get approved tomorrow.

Update:  The Piedmont City Council meeting lasted until Tuesday morning, at 2:30am.  During the proceedings, Oakland Council Rep Libby Schaaf voiced her concerns to city council reps.  As expected this Blair Park development was approved, by a 4-1 vote.