Last year, concerned Oaklanders got together to discuss city priorities and raise questions for the mayoral candidates.  Since the election, this Make Oakland Better Now group has evolved and now focuses on the city’s fiscal situation and 2011-2012 budgeting progress — for the rest of us.

Make Oakland Better Now, or MOBN! for short, plans to make a special visit to Montclair this week.  MOBN’s Bruce Nye, a local lawyer, will describe the city’s budget options along with the latest activities in City Hall.  We like that Nye and other volunteers have taken time to understand and clarify options, as independent citizens with neither special interests nor axes to grind.

“Pencil in” this Thursday evening, to hear about the our budgeting progress and ask a couple questions if you’re so inclined.  Nye will meet with Montclarions on Thursday, from 8-9pm — at Montclair Presbyterian Church, 5701 Thornhill Drive (map).

Many thanks to our local safety group, Montclair Safety and Improvement Council, which invited MOBN! to their monthly meeting.  Their regular safety meeting starts at 7pm, for those who are neighborhood watchers. 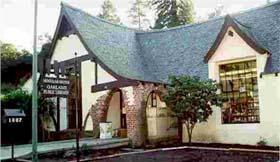 There’s plenty of concern about whether most of Oakland’s libraries can remain open, with the severe budget crunch.

Mayor Jean Quan has laid out three budget options, and Budget A translates into 14 closures — including our Montclair Library.  No one wants this worst-case outcome, given the painful cuts which would impact many city services.

Here’s a recap of the budget options, from District 4 Rep Libby Schaaf:

Save Oakland Library has outlined all the library closures and cuts caused by Budget A.  There would be only $3.6 million available from general funds, a pittance.  And Measure Q parcel taxes, earmarked for libraries, would evaporate.  Why?  These taxes only get collected if the City funds $9 million minimum from general funds.  (Measure Q contributed around $14 million this past year.)

We hope that Budget A won’t see the light of day!  So let’s move to Budget B which, according to Council Rep Schaaf, will keep the libraries open and hours intact.  She explains this budget scenario:

The total Library budget would actually increase by about $1.3 million and authorized staffing would increase by 1 FTE.  The only change required is shifting $400k in General Fund costs to Measure Q, which staff assures me won’t change services AT ALL.

But believe me, other Councilmembers and I love our libraries and understand their value.  I’m confident that even without full concessions, we’ll be able to preserve current library services and Mayor Quan’s Budget B shows it can be done.

That leaves Budget C, which involves an election and more parcel taxes. It’s a little hard to contemplate that option. Would we even have an election?  Would voters approve another tax, in this climate?  Who knows?

Hey, maybe we will somehow luck out — like Governor Jerry Brown’s recent, surprising revenue projection gift at the state level.

Everyone’s invited to Montclair Village this Thursday evening.  Why now?  After all, we’re not celebrating a holiday, wandering around a fine arts festival or eating our way through a fundraiser.

Village merchants are rolling out their red carpets for the first-ever “Shop Local Extravaganza.”  Stores are open late, so that we can pick up essentials or non-essentials before the Memorial Day weekend. 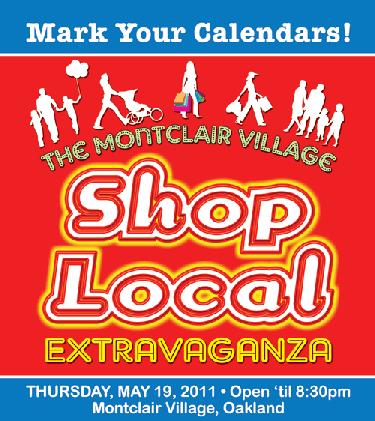 “It’s a perfect time for busy families to shop for seasonal specials and have fun in the process,” says Roger Vickery, director of the Montclair Village Association (MVA).

Village shops will stay open until 8:30pm, with their own special discounts and screaming sales.  To attract local shoppers and strollers, there will be additional lures of free food, refreshments, art and entertainment.