There was plenty of Twitter news yesterday, because the messaging system crashed briefly.  We think this outage happened while Barbara Walters and friends were chatting about it on their daily gabfest, The View.  Once again, an arcane SOMA start-up has entered the mainstream.

In a nutshell, Twitter enables you to leave short notes or “tweets” about anything.  You can subscribe to what your friends, families and work associates are saying, too.  Your faithful Montclair Blogger even decided to jump on the bandwagon, and began sending tweets as well. 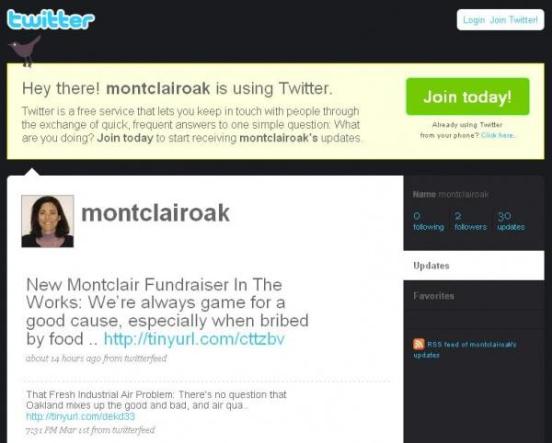 For starters, we show our blog headlines as another access point.  You can pick them up online, via your computer, iPhone or crackberry.  The place feels kind of empty right now, though that can change quickly if you sign up and follow us.

Twitter creates an informal channel to send quick messages to each other.  We hope to discover neighbors who want to comment about their Montclair doings, and create a two-way street.  (This is quite different than our social site, where there’s more time and room to share things.)

Anyway, I decided to check what folks are already saying about Montclair on Twitter.  Things are looking up since last year, when we read disparaging tweets about snooty Montclarions admiring their own perfection.

One San Franciscan recently went biking in Redwood Park, and grabbed a nice burger afterwards in Montclair.  After driving around different Oakland neighborhoods, he tweeted:  “It was very nice. Oakland does have a bad rap.”

Now let’s see what Montclarions have to tweet, in a whopping 140 characters or less.  It’s okay if you need to complain about your commute – or say whatever comes to mind.