If you have been a reader here, then you know about the Blair Park controversy.  While many Montclarions and Piedmonters want to keep the Park undeveloped, there are others who are seeking additional sports fields particularly for soccer players.

We decided to conduct a survey about all local sports fields and uses, and respondents were not shy.  The results are split into three posts because there’s too much to cover, and today you can catch the top-line results about Blair as well as survey participants. 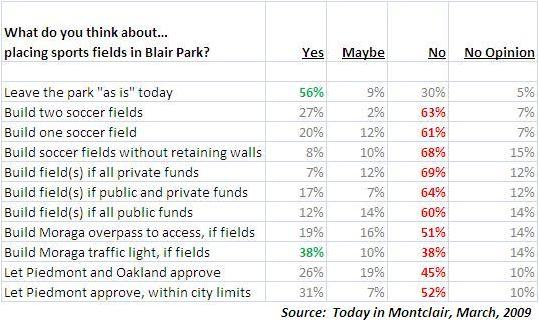 To Blair or not to Blair?

We started by asking a general question about development, and 56 percent said Blair Park should remain “as is” today.  Over 60 percent of respondents are against the Blair field construction as well.

At the same time, more than a quarter of survey-takers would like to see playing fields built at Blair Park.  Our survey isn’t a scientific sample, but we think passionate supporters from both sides are speaking here – and these ratios have been holding up since the survey launch.

If the fields were built, then we wanted your opinions about helping players cross Moraga Ave.  Respondents were evenly split on whether constructing a traffic light was a good idea, if this were possible to do.  The concrete overpass seemed less appealing, with 51 percent giving this bridge a thumbs-down.

We also tested the temperature about funding sources, and that brought out the nayer-sayers generally.  It turns out that the funding source didn’t push the needle too much, but nine percent moved to “no” if the fields were theoretically constructed with private funds alone.

Who took the time to respond?

Older Montclarions and Piedmonters participated in the survey, in what appear to be equal numbers.  Nearly three-fourths of respondents were between 40-59 years old, consisting of half in their 40s and a quarter in their 50s.

The split between sexes was almost even, with 48 percent male and 52 percent female survey-takers.  We had at least 200 visitors to the survey, but around a quarter answered all the questions.

Interestingly, the survey takers were not all sports mothers and fathers.  Exactly 52 percent were league parents and 35 percent were organizers of league sports.  About a quarter were parents of high school players as well.  Some five percent were athletic kids (ages 13+) who chimed in, too.

How often do you visit parks?

We wanted to know if respondents actually used or showed up at local parks.  Not surprisingly, 46 percent of respondents sit on the league sidelines at least once/week.  Some 37 percent said they also play weekly or more, and we suspect some parents fall into both groups.

Yet there is more informal use of the parks as well, with nearly a third showing up to play with their families or friends.  Over 80 percent reported visits to City and East Bay parks, with 50 percent visiting at least weekly.  While this strikes us as very high, perhaps this survey attracts more sporting Sams than average Joes.

Stay Tuned:   Please stop by this weekend, when we’ll discuss survey results about all local fields and their appropriate uses.