We aren’t going to pretend to have a magic wind that wipes out Oakland’s $31 million-plus budget gap, and so are focused on what decisions will be made by the City Council.  Like many of you, we hope our police department doesn’t get completely eviscerated. 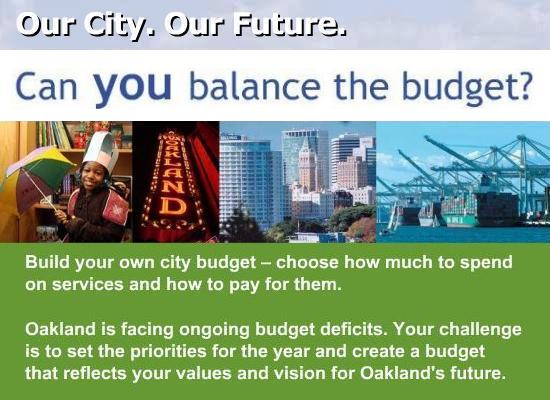 At this stage, Council members Jean Quan, Jane Brunner and Ignacio De La Fuente have identified tough-love cuts.  Before meeting in chambers, the Council has sponsored a few budget forums, encouraging a little bit of citizen participation and feedback.

The Oakland Budget Challenge also was updated, which enables you to work with budgeting levers.  What interested us most were  quantified responses to this question:  Should the City reduce the number of sworn police officers by July 1st?

So a third of Oaklanders who took this challenge want to keep the police officers, and another 15 percent said to cut officers now but restore headcount if a special parcel tax passes.  (From everything we have read, that parcel tax isn’t exactly popular.)

Now the City Council must close the deficit, whether their choices are politically popular or not.  After the death-by-a-thousand-cuts process, we wonder how the job will get done.