The elections are here!  You have only two more Farmer’s Market opportunities to meet the final nine candidates for Montclair Mayor.  We expect many of the would-be leaders to campaign at the La Salle voting booth tomorrow and next Sunday.

Our primary season featured some 20 candidates who all brought unique and relevant platforms to the voters.  The final slate shows nine candidates – rather than the expected eight – because the bottom two were only a single vote apart.  Your votes really do matter! 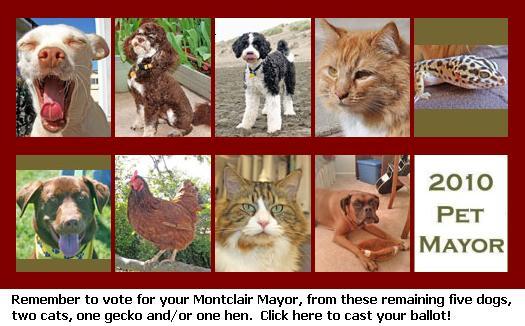 Montclarion remain open-minded, supporting mainstream as well as fringe candidates.  There are different species running to the finish, but we’re not convinced that our neighbors are ready for anything other than a wagging-happy canine.  Go ahead and influence the outcome by paying for your votes.

Our local Pet and Wildlife Fund does a great job of saving wildlife, and relies on this semi-democratic process to raise funds.  If you would like to support the cause in other ways, then visit Fenton’s Creamery this month for a S’more (A Great Cause) and 25 percent will also be donated to the Fund.  That’s pretty sweet!