As an unadulterated example of neighborly cooperation, the bunny story ranks up there.  A few days ago, the wires (and wireless) heated up over bunny sightings in Montclair. 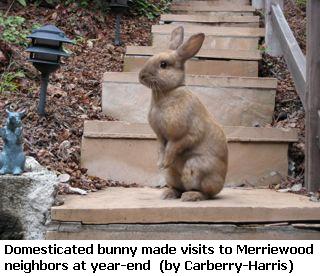 Yet Merriewood residents were getting a little confused, as they tried to solve the growing mystery.  At first there was one bunny, and then another.  One wrangler tried to straighten out all the cross-communications:

Montclarions jumped on the bandwagon because it was a quiet year-end.  Everyone was at home, and seemingly online too.  Two neighbors stepped up to the challenge, capturing and holding both bunnies safely.  We wondered about returning these bunnies to their rightful owner.

The Rest Of The Story

Montclarion Paula Moseley was the erstwhile bunny owner, having taken in several bunnies only a week earlier.  She shared her simple story of compassion:

I have only had the bunnies since December 22, when I was at the Oakland Animal Shelter and was waiting with a young woman who was going to turn in the bunnies.  She had already checked with San Leandro Shelter and they couldn’t take them.   She was concerned that Oakland would not take them either.  She had only gotten them that day when she met a man who found them in a box in the woods.  The young woman is a college student and had no place to keep them.

I said that I would take them since I have a large yard with a dog run.  Unfortunately the dwarf bunnies were small enough to hop through the wires, before I could reinforce it with chicken wire.  But they seemed to enjoy being in the yard and might keep to that area.  Not so.

They have explored the whole neighborhood munching all the way.  I have recovered the two younger bunnies but the larger one may still be at large.  I attempted to catch her on New Year’s Eve; I could be a foot from her but if I tried to restrain her, she hopped away.

At this point, there’s both good and bad news to report.  One bunny’s still at large.  One bunny’s been adopted.  And there are two more ready for homes.  Please reach Paula (baxterblanco-at-gmail.com) if you would like a bunny or find one running around your yard!

We mostly appreciated the whole show of compassion, with so many people helping these bunnies.  It’s a parable about how to treat fellow humans, not really a story about bunnies at all.