The Oakland City Council has now green-lighted ranked choice voting for November’s election, based on a vote of six aye’s and two nay’s.  That means four years will have transpired between voter approval and implementation, as the wheels of democracy turn slowly between the state and city.

What is this kind of voting?  Well, it’s a ballot that enables voters to select their first, second and third choices.  It’s a procedure which eliminates primaries and opens up the candidate pool as well.  Try out this San Francisco educational demo here. 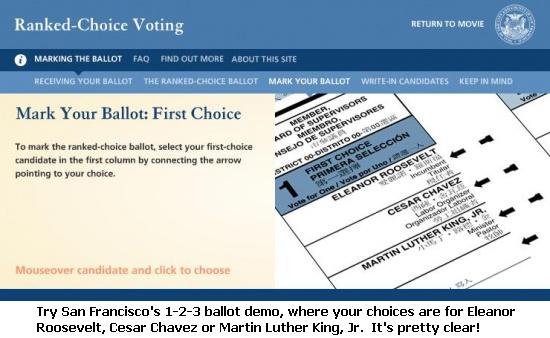 Some 69 percent of voters approved Measure O to alter and consolidate our local election cycle, back in 2006.  The Secretary of State finally authorized the change in December, and the Council’s blessed things tonight.  To remind everyone, here’s what voters approved:

This proposed Charter amendment would require the City to use a ranked choice voting method, known sometimes as instant runoff voting, to elect the offices of Mayor, Council, City Attorney, City Auditor and Board of Education at November general elections, which would eliminate June primary elections for these offices.

We watched many citizens address the City Council, often representing groups concerned about voter education and outreach.  The League of Women Voters’ president stepped up the podium and declared that “we’re prepared together with all the other community-based groups.”

Council members also took their time sharing views about voter turnout.  Their discussion then touched on the direct, unbudgeted costs to switch over:  it could run $1.5 million, or less when (most likely) shared with other Alameda County cities, namely Berkeley and San Leandro.

After all was said and done, the Council acknowledged many more voters would turn out in November rather than June – and that would make a big difference in voting outcomes.  Council members knew they needed to support the voter mandate too.

We listened closely to the City Council members, and their comments reflected the need to create a bigger, welcoming tent filled with candidates and voters.  The voting change allowed them to get on soapboxes.

Rep Nancy Nadel explained “it’s less expensive for the candidate, and that’s when you get real grass-roots policy makers coming forward.”  Our rep, Jean Quan, supported the power of coalitions and said the upcoming election must “have the most amount of people involved, of all kinds.”

All things return to Oakland’s budget deficit, currently pegged at around $12 million or so.  Reps Ignacio De La Fuente and Jane Brunner wanted to understand any incremental costs, this year.  As a voter mandate, the switch would come down to making other trade-offs and cuts soon – always about the money.