In November, Today in Montclair wanted to understand and gauge local attitudes towards taxes levied on homeowners.  After letting our real estate tax survey bake in the oven, we’re ready to share the goods with everyone.

The takeaways?  While you’re somewhat resigned to Oakland’s current taxes, you don’t want them increased much without better accountability.  You’re focused on how any tax increases would get spent by the city.  And you’re wrestling with Proposition 13’s legacy, too. 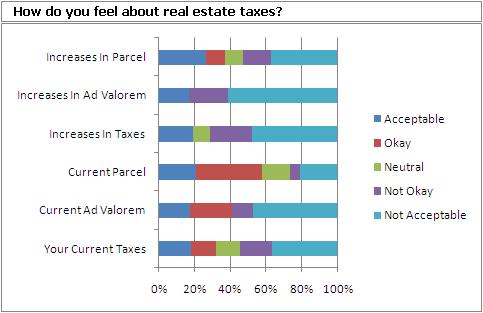 We also asked locals how they generally voted for measures which increased homeowner taxes.  These responses tracked consistently with parcel tax viewpoints.  Some 45 percent reported “no, most times” and five percent said “no, always.”  The remaining survey takers said they would accept increases most times/sometimes.

As expected, last summer’s decision to increase city ad-valorem taxes was rather quietly revealed.  These taxes were increased from 1.33 to 1.41 percent – and 36 percent knew, 59 didn’t know, and the rest weren’t sure. 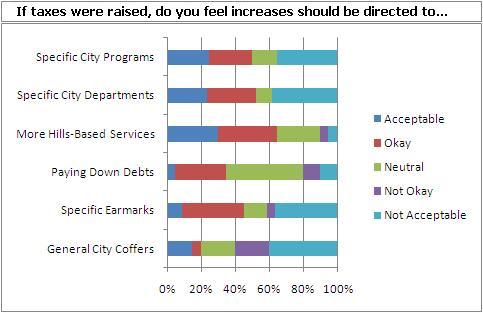 We asked a hypothetical question about how tax increases might be used, and Montclarions overwhelmingly wanted more resources directed to hills services:  65 percent ticked acceptable/okay.  This isn’t surprising, as you do hear neighbors complain about safety, infrastructure or park support.

Yet the desire to direct resources wasn’t fully focused on hills services.  Survey takers also believed that resources should be funneled to specific city departments or services, with over 50 percent deeming that acceptable/okay.

The majority of Montclarions didn’t want increases to be unassigned, as 60 percent were against increasing taxes for general city coffers.  However there’s ongoing debate about resource allocations and accountability:

– I do not trust the Oakland city council to make sound financial decisions but I also dislike special assessments for basic city services.  Piece-mealing obscures the reality and the enormity of the city’s spending.

– In general, taxes for a specific purpose do not work in Oakland – this just frees up general fund monies for non-worthwhile endeavors.

– My taxes keep going up and the city’s administration and services keep deteriorating. There is something wrong with this picture.

– OAK has to get its problems under control – the fiscal house is a fiscal sieve – you cannot have examples weekly of how badly the CC [City Council] misspends the precious resource – money and then have the CC going back time after time to require more payments.

– I don’t mind paying extra taxes but I feel the city is grossly mismanaged and any revenue raised goes into a black hole / politicians’ pet projects without any derived benefit to me, the tax payer.

Of course, the more-recent home buyers were taxed far higher than their neighbors.  One hard-hit respondent still took this in stride, declaring “I bought my house 5 years ago and pay more taxes than anyone on my street.  Something that raises my taxes $65 doesn’t bother me, and helps even out the tax load.”

Another survey taker believed we have to create a better tax solution:  “Generally speaking, we pay far too little property taxes compared to other parts of the world.  We need a way to contribute more to our living infrastructure without being too subjected to the wild fluctuation of the home values.”

Based on Today in Montclair’s real estate survey, we can safely say that locals are willing to pay up – far more than we expected.  However what’s done with the tax revenues is a much bigger question, and the City of Oakland will have to work on some real confidence and credibility building there.