After the storm passed through, the elderly trees had enough and wreaked havoc last night.  In the Merriewood area, one fell over and completely blocked the road while another dropped heavy loads down the block.

What happened to the power?  The transformer blew loudly, as all neighbors confirmed before 8pm last night.  Our Oakland firemen were on scene very quickly – a good thing since there were downed trees, live wires and even a snapped street light. Now let’s look at the repairs underway. 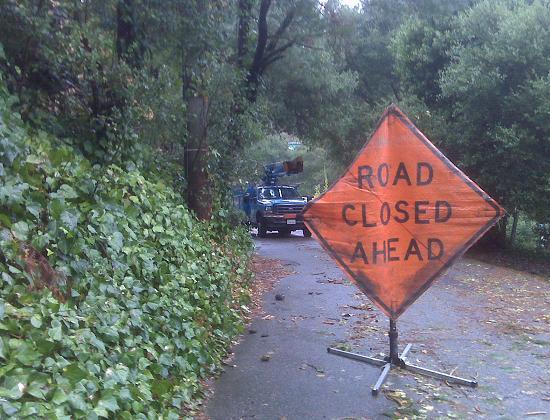 Roads Closed: Sometimes you welcome signs like “Road Closed Ahead,” when you know that the power is out and you really want it restored.  At least there was another egress down the hill. 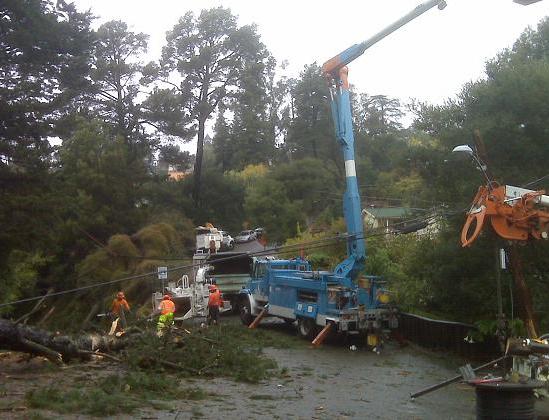 Crews On Site: There were crews hard at work, with these guys removing a huge tree lying at the Taurus and Merriewood intersection.  Another crew was working on the power lines above.  What a mess, but at least our Robin Hoods (sorry!) came to the rescue. 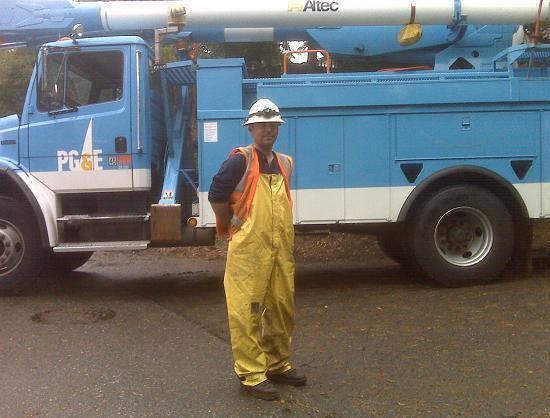 Utility Fixes: You could hear trucks all night and the live wires were all removed by the morning.  This PG&E guy was probably pretty tired at this point.  Comcast also showed up – and I’m chomping at the bit for broadband access.

We’re not sure when the power will get restored near Thornhill Drive, but the outage felt like our “dry run” for a full-on disaster.  The neighbors were out and about, sharing what they knew, borrowing flashlights, and offering help.  It was nice to know we could rely on each other.

More info: Check out KRON4 coverage of the clean-up – click on “Crews Work to Clear Debris and Damage Left After Storm” in their video player.

One thought on “The Elderly Trees Cut Power”