According to Zagat’s fast food survey, Peet’s only gets a bronze medal nationally for best coffee.   This is cause for distress, because Starbucks was awarded the gold and Dunkin’ Donuts received the silver medal.  McDonald’s and Caribou Coffee rounded out the list.

Zagat results came from 6,107 surveys which split 53% male and 47% female, clearly enough to place Peet’s in the top echelon.  We think results were skewed because the Berkeley-base coffee pusher has the fewest retail outlets.  It’s the smallest winner by far, with 188 retail stores versus next closest Caribou’s 414 company-owned and 97 franchised locations.

Outside of coffee rankings, Zagat surveys placed Peet’s on their lists three more times this year.  Our local chain continued to hold its own when compared to other “quick refreshment chains” as well. 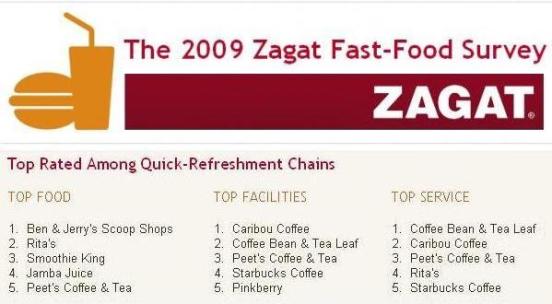 Peet’s received bronze awards for facilities and service respectively, which are nice gets.  We know you can easily waste hours in the Montclair Village outlet, and there are enough seats to handle the morning rush. Starbucks also made these lists yet our Village shop isn’t ideal; it’s a tiny place for visitors to pick up their familiar brews, and hardly conducive to meeting folks.

We had to laugh about Peet’s appearance in the food category, though.  You can pick up nibbles there, but when was the last time you were waxing poetic about them?  Maybe that rank reflects a low hurdle, since we’re talking about refreshment chains and everyone really eats meals elsewhere.

How do you achieve coffee chain supremacy?  I suppose some Peet’s aficionados will need to consider joining the Zagat voting pool next year – or else the Bay Area’s contribution will continue to pale next to Seattle and Boston’s best of breeds.

More info:   Check out our local coffee options – click here for comparisons and also here for a newcomer.