According to Zagat’s fast food survey, Peet’s only gets a bronze medal nationally for best coffee.   This is cause for distress, because Starbucks was awarded the gold and Dunkin’ Donuts received the silver medal.  McDonald’s and Caribou Coffee rounded out the list.

Zagat results came from 6,107 surveys which split 53% male and 47% female, clearly enough to place Peet’s in the top echelon.  We think results were skewed because the Berkeley-base coffee pusher has the fewest retail outlets.  It’s the smallest winner by far, with 188 retail stores versus next closest Caribou’s 414 company-owned and 97 franchised locations.

Outside of coffee rankings, Zagat surveys placed Peet’s on their lists three more times this year.  Our local chain continued to hold its own when compared to other “quick refreshment chains” as well.

Peet’s received bronze awards for facilities and service respectively, which are nice gets.  We know you can easily waste hours in the Montclair Village outlet, and there are enough seats to handle the morning rush. Starbucks also made these lists yet our Village shop isn’t ideal; it’s a tiny place for visitors to pick up their familiar brews, and hardly conducive to meeting folks.

We had to laugh about Peet’s appearance in the food category, though.  You can pick up nibbles there, but when was the last time you were waxing poetic about them?  Maybe that rank reflects a low hurdle, since we’re talking about refreshment chains and everyone really eats meals elsewhere.

How do you achieve coffee chain supremacy?  I suppose some Peet’s aficionados will need to consider joining the Zagat voting pool next year – or else the Bay Area’s contribution will continue to pale next to Seattle and Boston’s best of breeds.

More info:   Check out our local coffee options – click here for comparisons and also here for a newcomer.

Forgive the earthquake metaphor, but we’re really excited the Metro Cafe & Bar has taken up residence in Montclair Village.  What an nice upgrade from predecessor Royal Ground, complete with real cafe food, coffee, wine and wi-fi.

Most importantly, the Metro sports nice, long hours:  6am-9pm weekdays and 7am-8pm weekends.  The place is located at 2058 Mountain Blvd, right in the center of the Village (map). 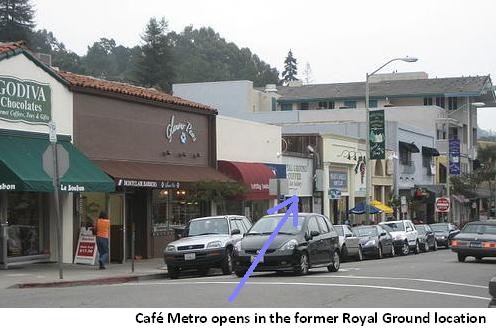 There are good breakfast options until 11am, especially if you want to grab something beyond the baked goods typically in coffee shops.  I can attest to very friendly service today, as they accepted my bagel and lox order a few minutes past the cut-off time.  Other menu items include oatmeal, yogurt, fruit and an egg sandwich.

I’ll have to return for lunch or dinner soon, since the mediterranean, nicoise, salmon and chinese chicken salads all sound quite good to me.  While there are several hot and cold veggie sandwiches, the hot ham and gruyere catches my eye as well.

We hope the Metro turns into another third-place for the Village, as a real alternative to Peet’s or Crogan’s.  Have you tried ’em yet?

We recently surveyed Montclarions about everyday food, including top spots for coffee, grocery shopping, pizza and chocolate.  Coffee seems to be the most local preference, since everyone gets their fixes in town.  When it comes to the other staples, however, you are willing to shop around.

Over 60% of Montclarions prefer Peets, in a resounding and crushing victory.  The rest of you split the remaining votes among Thornhill Coffee, Royal Ground and Nelly in the rear.  Good old Starbucks didn’t register much with locals, but some visitors must keep them in business.  (Click for more Montclair Coffee Shop info.)

There’s simply no consensus about the best place for groceries.  As the election official, I’ll award the sentimental favorite medal to Farmer Joe’s (Yelp).  There were enough write-ins to make it rank among the balloted candidates.  Here’s what Yelpers had to say:

Back to the official election results now.  Within the Village, Lucky received the most votes but no one raved about the market.  They did like the convenience, staples and prices there.  Beyond the Village gates, Trader Joe’s (Yelp) was the preferred alternative.  By comparison, Safeway and Village Market trailed behind and Whole Foods straggled into last place.

What a close race, which required a recount of the paper ballots!  The almighty Zachary’s (Yelp), over in Rockridge, came out the overall winner – which means our pizza identity is shaped more by Chicago than anywhere else.  Within Montclair, the two winners were Cybelle’s and Rustica.  The runner up and dark horse was Red Boy (Yelp), just down Park Blvd.  (Click for more Montclair Pizza info.)

Well who can argue with Berkeley’s Scharffen Berger (Yelp), which came out tops?  It was a three-horse race, with strong contenders Le Bon Bon and XOX Truffles pulling up the rear.  At least we have truly top-notch chocolate around here, so the supermarket option wasn’t much considered by survey respondents.

Thanks all, for your votes and opinions.  What morsels should we survey next?

Around Montclair, people were buzzing about the Starbucks closings list distributed by the Seattle behemoth.  Everyone I spoke with seemed curious about the Montclair store, which will remain opened after all – right across the street from Peet’s.

The stakes are not terribly high, so why are the emotions?  Local pride, as reported by the East Bay Business Times.  They identified seven East Bay locations slated to close, and gloated about one store that’s closing near the original Peet’s location in Berkeley.

Maybe we want Starbucks to slink away, but that’s not happening soon.  Much like how fast food outlets congregate together, our mix of coffee chains and indie shops means there’s plenty of demand.  Starbucks drafts along with these other shops, and also provides decent jobs and benefits for its employees.

When aliens land in our Village, they’ll likely be scratching their heads about all the coffee places here.  They will learn these shops aren’t only about dispensing coffee – they are about checking in with neighbors too.  Depending on the time of day, they are filled with commuters, moms and kids, local workers and retirees.

Montclair has six options, so where should you go?  That depends on what criteria matters to you:  location, seating, coffee, food or attitude.  Here are some of the choice Yelp reviews below.

“The montclair village would totally suck if it weren’t for peets.  my husband and i never talk about it but i believe it’s proximity to peets (like 50 yards) is one of the main reasons we bought our house.  (oh… and er… the schools).”

“I love the way there are always giant friendly doggies outside, just waiting for you to pet.”  “The regulars seem to know each other.  I suppose it’s like a 21st century Cheers — where everybody knows your name.”

“The Montclair one is smaller and the employees are pretty annoying, but I tend to enjoy sitting on their bench”  “For real, the best thing about this starbucks is the window seating and the bench out front.  From there, you can look across the street to see people drinking yummy Peets coffee!”

“There was a woman (presumably one of the staff) who wiped down the cream/sugar station before leaving for the day and offering her farewells to her coworkers.  When I asked, my suspicions were confirmed…THAT was Nelly.  Having the owner take a few seconds to do a simple task – and not pass that task on to a subordinate – really shows a lot of class!!”

“I love small, locally owned coffee houses, and so was obviously a sucker for Thornhill Coffee House from the very start.  I’m a bit of an idiot some days, and on this particular day, I walked to Thornhill Coffee House without my wallet.  the shop owner handed me the coffee and sandwich, and told me to go ahead and take it, and that I could pay her next time.  This never happens in Oakland!”

“This might be the worst Noah’s anywhere. My bagel is never fully toasted, they often don’t follow the directions on the order form, and the employees don’t really know their products that well.  They’re usually good about fixing mistakes.”

“Most cities would love to have a malt shop like this.”  “This is a mom and pop shop … not a chain.   It is very expensive to run a business in Oakland. No wonder prices are not bargain basement.  And Montclair Village is special. It is a jewel in the bay area. There are few places like it.”

2009 Updates: A new coffee shop has opened in the Royal Ground space, after big renovations were made.  We added them to the Montclair Coffee Chess list below.

“I had a cup of drip coffee, I think it was Mocha Java, and it was definitely the best cup of coffee I ever had.  I am not a coffee snob.” “Metro serves beer on tap and excellent ice tea.  The lunch menu is a little pricey for a cafe, but the food is better than you’d expect….I like this new addition to Montclair.  It’s almost, sorta, nearly hip.”