It’s true that the Oakland Park Rangers are on the endangered species list.  There are three rangers now, who can’t possibly roam around the 120+ parks and rec centers throughout the city.

Ranger Mark Oliver is one of the endangered rangers, who’s been keeping Oakland parks safe for the past 21 years.  “That’s our primary responsibility” explained Oliver, “so that moms, kids, daddies and senior citizens, when they go out to use the parks, they can feel safe.” 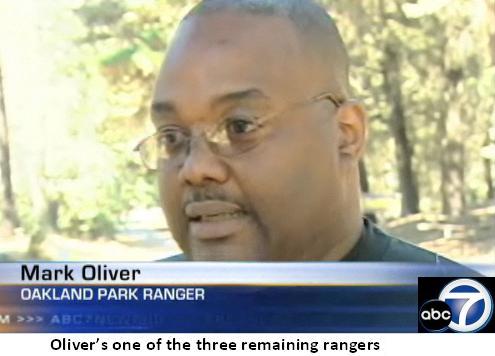 The park ranger unit was founded back in 1946, and staffed at least 20 rangers just seven years ago.  Most recently, the unit had eight ranger positions and one records specialist.  With the latest budget travails, there are now three lone rangers.

According to an e-mail sent to “supporters of safe parks” this afternoon, these rangers will do the best they can with their remaining 15 shifts.  They will be working weekdays but not on Saturdays, Sundays, Holidays or night-time shifts.  If rangers are sick or on vacation, there won’t be back-ups.

Last week, I took a quick hike at Joaquin Miller Park and visited the Ranger Station.  It’s like visiting a neglected attic there, with old exhibits about Miller, and a sign saying the ranger’s office is closed.  Very sad vibe, even though I understand that staffing field offices is a luxury.

At least for Joaquin Miller Park and other heavily-used destinations, I wonder if we should develop even stronger volunteer efforts.  The Ranger Unit says they are looking for volunteers for these duties:  Citizens on Patrol, Bicycle Patrol, Mounted Patrol, Field Office Representative, and Special Events.

Is there a ranger left to organize volunteer efforts?  Try visiting the Ranger Station (map) or else calling 510-482-7888 weekdays.  We often clean up parks but don’t think much about helping with safety matters.