We weren’t sure what to expect at the “Celtic to Coltrane” performance yesterday, and left the Malonga Casquelourd Center filled with pride about the local jazz scene.  It was such an upper!

The hostess and organizer, Destiny, decided to celebrate her birthday in grand style.  During the concert, she invited a parade of musicians to the stage and encouraged them all.  Meanwhile, the audience bowed at the Church of Coltrane’s altar. 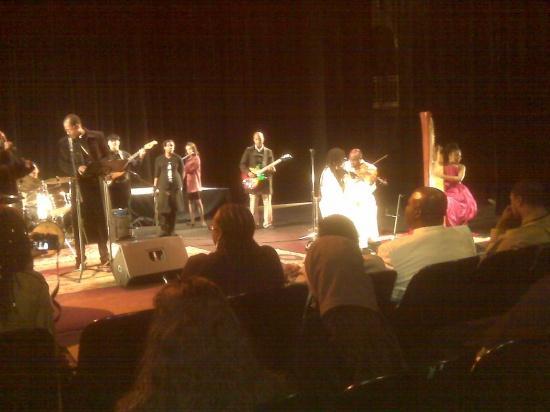 The Players ranged from talented unknowns to old hands.  Destiny kicked things off with her harp and soulful singing, and was later joined by her Strings of a Nubian Groove.  Nona Brown, who’s backed Patti LaBelle, played piano and sang with Destiny.  D’Wayne Wiggins also played a little guitar – one day Alicia Keyes, the next in our ‘hood.

The Kids were the real stars yesterday, performing as part of Oaktown Jazz.  Under the tutelage of trumpeter Khalil Shaheed, we heard a 10-year-old crooning, a couple 12-year-olds on flute and piano, two saxophonists, a bass player and an amazing drummer.  The future brought big grins to everyone there.

The Church of Coltrane wrapped up the concert, with a little preaching and benediction by Pastor Wanika Stevens.  He gave thanks to John Will-I-Am Coltrane and the spirit of jazz, while we all chanted A Love Supreme together.  Just a typical, spiritual Sunday afternoon in Oakland!