We’ve been shaking our heads at the local unemployment level, around 17 percent, but didn’t understand how our recessionary experience compared to other places.  We just discovered the unvarnished reality – things are uglier for Oakland than nearly all the largest U.S. metropolitan areas. 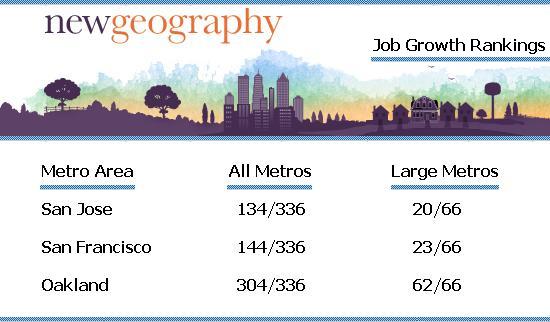 The rankings show that Oakland’s metro area, which also includes Fremont and Hayward, ranked 304 among all 336 metros and 62 among the 66 largest metros.  The numbers reflect both current and past trends in employment, as a predictor of economic futures – but don’t even take into account this year’s numbers yet.

Our Bay Area siblings did a lot better, with San Jose ranking 20th and San Francisco ranking 23rd among the 66 largest areas.  We were a little taken aback, and then noticed the mix of single and multiple-year job counts in the calculations (more here).  These places did better in the past decade, and that shows in the rankings.

What’s happening now?  According to New Geography, Oakland sank right along with Sacramento and San Bernadino to the “bottom ten” of large metros due to the housing bubble-burst and construction job evaporation.  The geographers actually pointed to State regulations constraining recovery as well.

We hadn’t expected to be in such dire straits – and have almost nowhere to go but up?!