In Montclair, Maureen Vergara broke our glass ceiling as the first female Problem Solving Officer (PSO) assigned to the Village.  She’ll be a presence in the community, as the “go-to” contact for Montclair and North Hills residents. 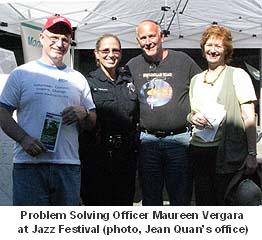 PSO Vergara is pictured above, along with Montclair Safety’s Nick Vigilante, Jim Dexter and Jean Quan staffer Sue Piper.  Welcome her to the neighborhood – without any interrogation about her family, hairstyle or choice of eyewear!

Along with Vergara, the other two Oakland Police assigned to our 13Y/13Z beats are Sgt. Bernard Ortiz and traffic contact Jason Scott.  We met the other officers during early July, where they shared safety priorities.  They can all be reached via email, including Vergara at mvergara-at-oaklandnet.com.

Calling “911” works best from your land-line.  However this number connects you to Highway Patrol, when called from your cell phone.

Since it will be virtually impossible to recall these numbers right when you need them, just take a minute to save them in your cell phones.

One thought on “New Cop Assigned To Montclair”