At least in the Oakland Hills, you need a many-faceted prism to measure student performance.  Success isn’t exactly defined by public school tests and rankings alone.

When you track the performance of our elementary schools in the hills, there are no surprises and they rank highly year after year.  By high school, these numbers decline precipitously and top performing students seem to vanish as well.  Let’s examine this a bit more. 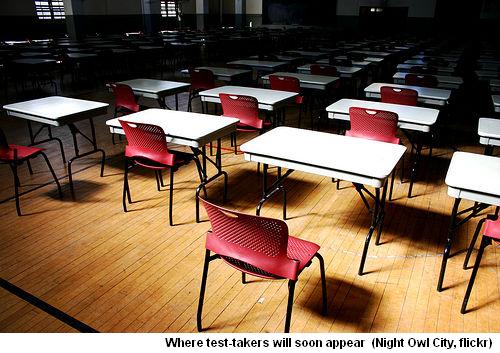 The State of California just released their Academic Performance Index (APIs), and our three schools scored well as usual:  Montclair at 957, up 35 points from last year; Thornhill at 944, up 20 points; and Joaquin Miller at 886, up 18 points.

Oakland’s average score is 695, which includes all elementary, middle and high schools city-wide.  That number gets driven down by economically disadvantaged students who scored 668 on average.  As a proxy, racial breakouts also show APIs of 902 for Whites and 630 for African-Americans overall.

For the Oakland Hills schools, the paler and richer kids living here perform better as a group – and are more highly represented in the elementary schools.  Thus we expect our local schools to score well on standardized tests, and are satisfied when they achieve mid-900 APIs.

Among Oakland’s middle schools or high schools, things change quickly.  There are no standout API score performers except for a few charter schools, and none around here.  We believe that reflects shifts in school populations, as kids are sent beyond their neighborhood enclaves to public or even private schools.

By middle school, you see the average scores reflect these changes and begin to drop.  For example, Montera registers an 814 API that includes 928 for White and 912 for Asian students.  Likewise, Claremont reports a 701 API, including 915 for White kids there.

Skyline High doesn’t do well period, with a 667 API that’s below the overall Oakland average score!  Again there’s a mixed bag with White and Asian kids delivering around 790, while African Americans and Hispanics hover near the 600 mark.  Disadvantaged students of all races deliver a 641 API.

Since Skyline is a very large high school, with well over 2,000 students, it’s difficult to raise the API averages with smaller high-achiever contributions.  Yet the drop is so substantial that you have to wonder what is happening with students, as they hit the high school years.  Are things really that bad, or do the number hide success stories?

One way to find out is through standard college-admissions tests like ACTs or SATs.   The 2010 news isn’t pretty, as there are ZERO National Merit Semifinalists from either Skyline or any Oakland public high school.  This award recognizes the top PSAT test-takers from junior year.

Where have all the smartest kids gone, all to private schools, every one?  We know there must be successful students around, but it’s so hard to isolate them as a group.  The testing prism is all about ensuring the minimums, and not really peering into what’s happening with our children as they grow up in the public schools.

More info:   Check out the State of California API reports, including Oakland’s school details and Oakland’s race segmentations.  Also see the California’s National Merit Semifinalists. The Tribune’s Katy Murphy has written all about API inequities and Merit awardees in Oakland too.

Are you familiar with Skyline High?  That school where principals only last around a year?  It’s kind of depressing to report that no one wants the job at this point.

The Tribune’s Katy Murphy recently confirmed the latest selection, Lauren Klaffky, decided against taking the post.  We’ll never know her exact reasons but that’s water under the bridge.  The Skyline search committee will need to soldier on.

We’re wondering how this leadership gap affects the morale of teachers and students.  If history repeats itself, then Skyline students are going to feel some pain.  When the 2006 school year began without a principal, it wasn’t pretty.  “It’s like nobody knows anything, basically,” said one 16-year-old student.

Two other principals followed since then, including the firing of the last one.  That means the Class of 2010 students, by graduation, will have welcomed four different leaders and learned the meaning of fungible:

fun-gi-ble: (adjective) – being of such nature or kind as to be freely exchangeable or replaceable, in whole or in part, for another of like nature or kind.

The teachers aren’t saying much, but at least one reacted to the search with equanimity:  “There are some big shifts happening at the school next year and maybe it’s better if teachers have to shoulder the responsibility to make sure they come off.  Certainly, waiting for a savior is not a good strategy for improving such a large, complex institution.”

Skyline has over 2,000 students and is the only public secondary school sitting in the Oakland Hills.  Maybe we could rally and figure this one out.  Kind of embarrassing, huh?

Kudos to Piedmont High, which has been awarded a gold medal by US News and World Report – ranked #64 among all U.S. public schools.  Nearby Skyline High dropped out and was nowhere to be found.  You might jump to the conclusion that these rankings reflect the socio-economic mix at high schools, and you would be correct.

The US News rankings are based on academics and college preparedness, and they valiantly attempt to factor in economically disadvantaged kids.  The calculations come from these sources:  proportion of kids taking Advanced Placement or International Baccalaureate courses; actual scores from these college-credit tests; and participation levels by economically disadvantaged kids.

School Matters calculated all high schools for this report, and assembles all kinds of information on U.S. public schools as well.  So I pulled up a comparison between Piedmont and Skyline to see where they stand on general proficiencies.

While the data is a year old, the overall proficiencies tell a clear story:  97.5% for Piedmont and 75.5% for Skyline.  No matter how you slice the data, economically disadvantaged kids didn’t perform as well and pulled down the averages.  When you exclude that population, the numbers look a little better but there’s still a large gap.

Top Ranked lists are always interesting but can be twisted in so many ways.  Is a high school most successful when they focus on AP tests?  Are disadvantaged kids best measured by the sliver who do?  Well, there’s some validity to the new twist from US News and it’s terrific that Piedmont is a shining star.  But for the Skyline parents and kids who are college-bound, don’t worry too much about it.