Kudos to Piedmont High, which has been awarded a gold medal by US News and World Report – ranked #64 among all U.S. public schools.  Nearby Skyline High dropped out and was nowhere to be found.  You might jump to the conclusion that these rankings reflect the socio-economic mix at high schools, and you would be correct. 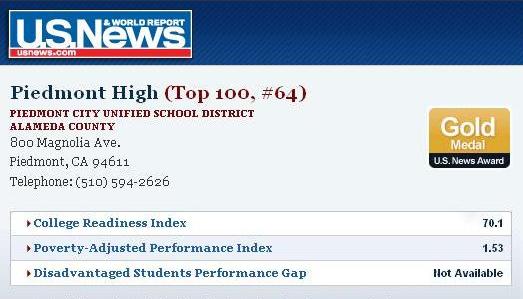 The US News rankings are based on academics and college preparedness, and they valiantly attempt to factor in economically disadvantaged kids.  The calculations come from these sources:  proportion of kids taking Advanced Placement or International Baccalaureate courses; actual scores from these college-credit tests; and participation levels by economically disadvantaged kids.

School Matters calculated all high schools for this report, and assembles all kinds of information on U.S. public schools as well.  So I pulled up a comparison between Piedmont and Skyline to see where they stand on general proficiencies.

While the data is a year old, the overall proficiencies tell a clear story:  97.5% for Piedmont and 75.5% for Skyline.  No matter how you slice the data, economically disadvantaged kids didn’t perform as well and pulled down the averages.  When you exclude that population, the numbers look a little better but there’s still a large gap.

Top Ranked lists are always interesting but can be twisted in so many ways.  Is a high school most successful when they focus on AP tests?  Are disadvantaged kids best measured by the sliver who do?  Well, there’s some validity to the new twist from US News and it’s terrific that Piedmont is a shining star.  But for the Skyline parents and kids who are college-bound, don’t worry too much about it.