Many Montclarions have been investing in surveillance cameras, partly to catch prowlers as they check out autos which are parked outside homes or on local streets.  This past weekend, one neighbor shared a snapshot from a prowler who didn’t find anything of interest — and didn’t bother breaking into a car either. 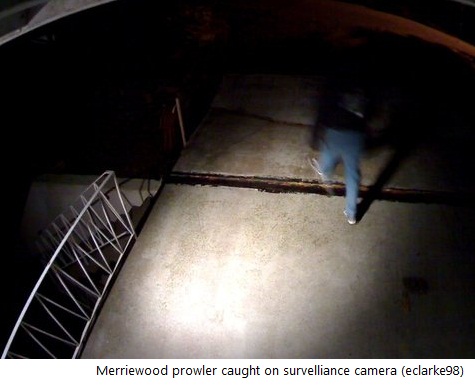 The would-be thief arrived Saturday morning at 12:40 am, over on Merriewood Drive.  This area, right off Thornhill Drive, features many older, renovated homes which simply don’t have garages.  A couple autos have been hit up in the area, with windows smashed and valuable items gone by morning.

According to the homeowner’s report on Montclair SIC’s message board:

Our security camera captured someone walking out of our carport, presumably after attempting a car burglary.  Our doors were locked and they did not appear to be walking away with anything.  No windows were broken.

The image doesn’t show the person’s face, [and] they were wearing dark tennis shoes with white trim, blue jeans, black sweatshirt with hood and white logo on the back, and gloves.  Another reminder to lock your car doors.

We have heard, repeatedly, to lock up and make sure nothing of value is left in your car.  Even ID information like your registration and insurance should be removed, lest that tempt the fates.  Yet nothing happened here, at least this time.