If you live in the northern reaches of Montclair, then you likely know the Caldecott Tunnel’s Fourth Bore construction is finally happening now.  It will take four years and some $420 million to complete this mega-project.

During the standard workday, you can drive by and catch some construction on the northern side of Route 24.  There are various cranes and trucks working on the barrier, like the one yellow beauty we caught in action below. 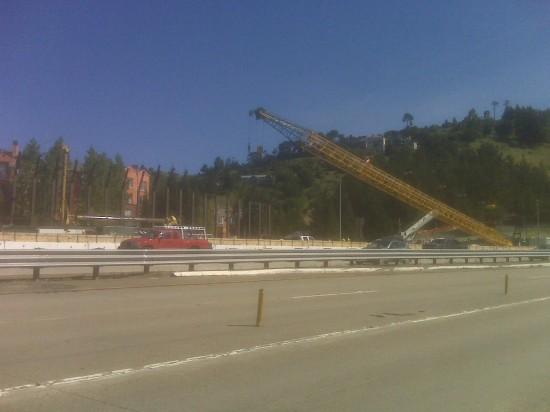 Late yesterday afternoon, there was an exit closure which might be due to the mega-project.  We were headed westbound on Route 24 and wanted to go to Berkeley, but the Highway 13 interchange was blocked in that direction.  Anyone else run into the problem?

On the Caldecott web site, Caltrans reports this 24/13 interchange work as underway.  Take a quick look at that purple line in the overlay view below, where the connector road will ultimately be moved.  We were a little annoyed and surprised by the activity, but could easily re-route yesterday.

At this point, Caltrans is not only working on that highway interchange but also the Kay Street overpass.  As part of construction abatement, workers are widening the street and installing a traffic signal.  These improvements matter, especially when all the truck traffic arrives down the road.

When dealing with the Fourth Bore, Montclarions will need to learn patience – and exhibit that trait over the next four years!

More info:  See the Caldecott Tunnel mega-project’s web site, including a list of current activities and recent photo gallery.  There are also links about noise data, traffic advisories and closures.

One thought on “Caldecott Mega-Project Underway”