Try imagining a world that’s more like Portland than Oakland.

While a bus rapid transit project won’t literally impact Montclair, the opportunity captured our attention during the City Council meeting tonight.  The route would run along the entire length of Oakland, across International and Telegraph – and maybe look like these mocks below. 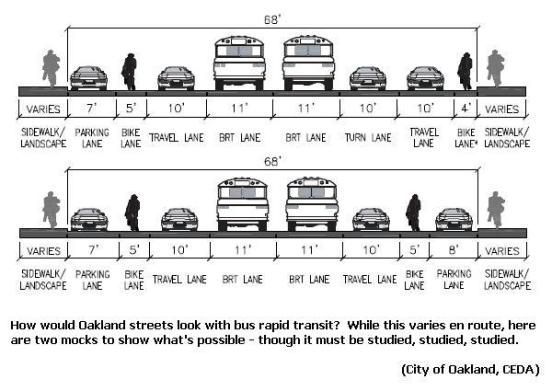 Is there a preference? Not yet.  Our City Council was asked to green-light an environmental impact statement and review, including designated and non-designated lane options.  Listening to residents and Council reps, there’s no consensus right now.

Who makes decisions? The City has control and officially owns the city streets.  If this rapid bus option were in the cards, then A.C. Transit would legally access a portion of the streets from the city.  However Caltrans has authority on International, below 42nd Street.

Why are the sparks flying? Everyone who lives near the potential route seems a little scared.  In East Oakland, there’s no well-developed district along International and added traffic would be detrimental.  In Temescal, there’s a nicely developing district along Telegraph and concerns over parking spaces.

Could Portland happen? It’s the million(s) dollar question.  Council Rep Larry Reid, of East Oakland, mumbled “this will never happen.”   Many Oaklanders stepped up to the mike and shared their public transit hopes and dreams.  Around the hills, we are mostly drivers – but aspirations are a good thing.