Hollywood.  New York.  Montclair.  Who knew that kid-oriented media could take a leap forward here?  Since last year, local Dean Kisieu had been chatting about improving tween offerings.  He wanted star athletes to help educate and entertain kids, through a mix of TV and more interactive media. 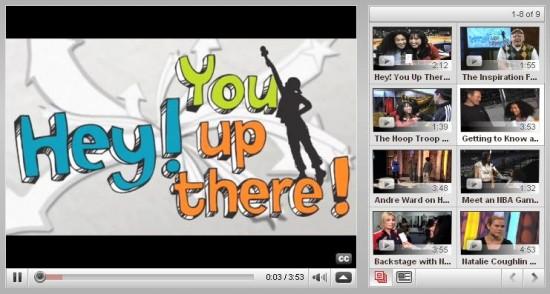 Today we ran into Dean while making a coffee run, and learned about the birthing of Hey! You Up There! This program was “picked up” by Comcast SportsNet California (cable channel 41), and starts airing in late summer.  Next up is a San Francisco fair, including a mascot contest, coming this fall.  Plus a feature-packed site will encourage tween involvement with athletes and much more.

Check out the videos here.  We liked the interview between Montreal and hockey star Claude Lemieux, where he told the interviewer how her name should be pronounced in French.  You hear Lemieux explain that, as a teen, he used to pull double-shifts at a gas station and disliked this job.  He really couldn’t think of any other job he even liked to do now, besides hockey.

Olympic swimmer and multi-medalist Natalie Coughlin also jumped into the act, admitting she felt foggy during the Athens Olympics and later frightened by the 18,000 Beijing fans.  She was still embarrassed about crying during her most recent gold medal ceremony.  Oh, and she gave up spelling “guacamole” when put on the spot.

Some sweet connections were also made with Olympic boxer and gold medalist Andre Ward.  During a push-up contest, he eagerly competed with a local boy and they both ended up smothered in pie cream.  Athletes like Ward seem very accessible when communicating with kids – by sharing feelings, providing life lessons and clearly having a little fun.

To brighten your day, we simply had to pass along these previews.  Montclarion Dean Kisieu and his co-founder, Mike Kennedy, also describe their mission on Vator.tv, where you should register and vote for them.

P.S.  If you or your neighbors are doing interesting things, then please share ’em with MontclairOak.