“I have directed staff already to roll back to 6pm,” declared City Administrator Dan Lindheim at last night’s Oakland City Council meeting.  We’re not exactly sure when the city parking meters will get adjusted, but believe it will only take a week or two.

The City Council just voted six-to-one to rescind their summer decision that extended hours through 8pm, as well as to study parking at retail district levels.  Their projected $1.3 million revenue gap would primarily close from new billboard revenues.  If these revenues don’t materialize, then the Council would revisit the matter next January. 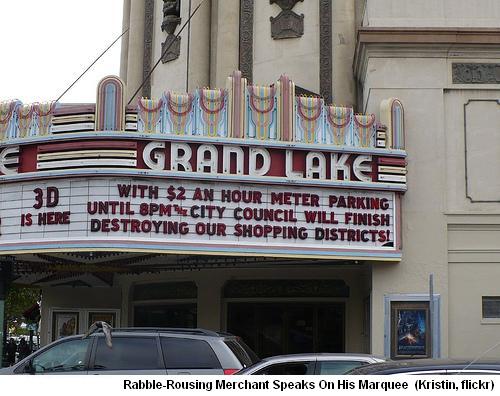 What’s interesting is that every single Council member admitted they were too hasty, and offered mea culpas.  Rep Ignacio De La Fuentes claimed, “We made a mistake not checking, not checking in.  Our common goal is to restore the confidence.”  Rep Jean Quan added, “I know there are a lot of bad feelings.”  And Rep Pat Kernighan, who sponsored the roll-back measure, explained that “people don’t want to feel like we’re balancing the city budget on their back.”

Kernighan pointed to coverage by Parking Today about Oakland’s challenges:  “Oakland is attempting to raise parking rates.  They have done some good things in the face of the recession, but can’t seem to get any respect.”  The industry pub also acknowledged that parking is always super-sensitive:  “Screw with a person’s taxes and you have a heated discussion; screw with their parking, and you have a revolution.”

Last night, there was a long parade of speakers who demonstrated that sensitivity:

Clearly Oakland’s parking policies aren’t fait accompli.  At-Large Council Rep Rebecca Kaplan said, “I’m grateful that we’re now going to do parking studies [as there are] differences by parts of the city.  I don’t believe that early is always better or later is always better.”

So what about the idiosyncratic needs of each retail district?  From all of the speakers tonight, it does seem like Grand Avenue was hit, while College Avenue wasn’t suffering nearly as much.  Over in Chinatown, the merchants registered high concerns with parking changes.  Here in Montclair, the merchants have been clear about their challenges.  And so we’ll stay tuned for studies – and further parking policy adjustments.

October 8th update:  The meter hours were rolled back yesterday.  Montclair Village Association’s Roger Vickery said, “we are delighted our concerns about the adverse affect the night time rates were having on business have been heard.”

One thought on “Parking Meters Rolled Back To 6pm”