While there were a few hundred Chrysler Air Raid Sirens installed during the Cold War, only one has been actively used for performance art these days – and it’s from Oakland.

After Jack Schroll rescued this monster siren from Woodminster Amphitheater in 2007, it was first used in a Burning Man Festival project!  As part of Crude Awakening, created by Oaklanders Dan Das Mann and Karen Cusolito, the siren called people to worship at the oil derrick’s altar. 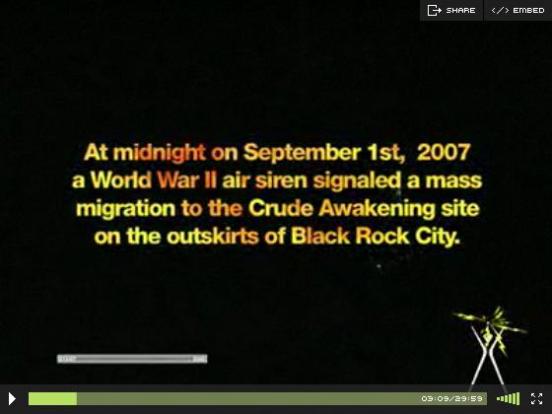 Click on the video and see the whole story unfold.  At first, the steel people are doing what comes naturally and actively worshipping their oil god. 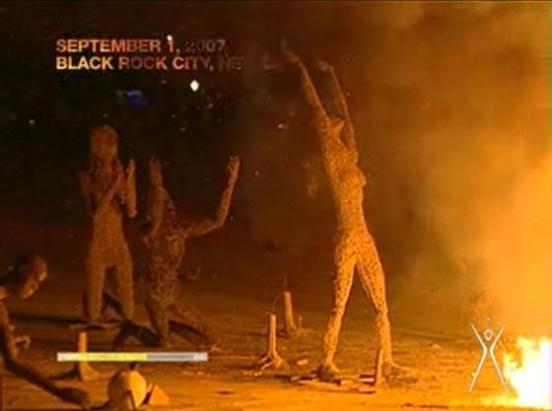 Eventually their false god consumes its very last oil, as represented by the fireball.  Afterwards, the worshippers are able to return to and respect nature again.  (From attendees, we heard this felt like an apocalyptic scene.)

Beyond Crude Awakening, the Oakland Victory Siren has been used in other performances.  There was another great Dan Das Mann show on the water – watch this Sausalito Burn Boat video complete with the siren, fire bursts, tesla coils and music.  For a front-row seat, here is the siren blasting away on the boat.  (Yes, it’s really that loud.)

The siren’s made appearances in the Bay Area each year.  It’s been down in Half Moon Bay, at the Pacific Coast Dream Machines show, and wheeled out for inspection at the Alameda County Fair as well.  What an interesting Cold War relic and legacy to see up close.

More info:   Learn all about the Chrysler Air Raid Sirens and how one devoted Oaklander rescued and refurbished this Oakland blaster – Oakland’s Victory Siren Gets Saved.

In the Oakland Hills, we were sitting on a Cold War relic that had been ignored for decades – until it was rediscovered and used by Oakland performance artists.  The story begins with a Chrysler Air Raid Siren, which was dusted off and lovingly saved for posterity by Oaklander Jack Schroll.

“I could not let this piece of history go to the scrap pile,” Schroll explained.  “I have made a good living in Oakland for the last 33 years and I feel this is a small something to give back.  I will never sell the siren.”

Remember fall out shelters?  After World War II, Americans were drilled in how they should respond to missiles and other enemy threats while at home, work or school.  You were supposed to duck and run for cover when you heard the dreaded siren.  (Don’t worry, it was before my time too.)

Around the country, there were a series of alert systems set up to communicate with citizens.  You probably know about the “emergency alert” tests conducted by TV and radio stations.  In addition, extremely loud air raid sirens were installed to let everyone know something was, well, very wrong.

Chrysler manufactured many of these long-distance horns, including one model that put out 138 decibels and produced 30,000 watts of power.  They only delivered a few hundred of these monsters, between 1952 to 1957.  Of course, the sirens were tested regularly and maybe helped deflect Americans’ fears.

One siren could be heard four to five miles away.  The siren operator also could be remote, since he was able to turn it on or off by “high tech” telephone.  According to Victory Siren, “the loudness of this siren is unmatched by any other warning device ever sold, ever.  It’s also considerably louder than the largest steam whistle or horn.”

Our local Chrysler had been perched atop the Woodminster Amphitheater, in Joaquin Miller Park.  After years of neglect, Oaklander Jack Schroll decided it was worth saving.  Schroll had to battle the City of Oakland, but his mission was a roaring success.

There were actually five documented sirens in Oakland, including two that still existed on Lafayette School and Woodminster Amphitheater roofs.  The Woodminster siren seemed to be in very good shape, in a protected spot for decades.  Years of summer theater-goers had no clue it was there, but Jack knew otherwise.

Schroll first submitted approvals for restoring both sirens and spent nearly two years wrestling his request through the Landmarks Preservation Advisory Board.  In April 2007, the Preservation Board granted their unanimous approval  (see PDF).  The Oakland Unified School District and City of Oakland later gave their thumbs-up, since the sirens were owned by those entities.

Now that Jack had the rights, extrication and refurbishment presented the next hurdles.  I was able to reach him a while back, and asked about the steps involved:

It was a matter of preparing the proper documents.  I had to send a copy of the crane operators license to the City Attorney’s office along with proof of insurance.  This was a little tricky as everything really had to happen at the same time.  The City issued a permit to remove property on a given date.  I had to coordinate with the Public Works Dept and the City Attorney’s office.  There were a few snags and I must give credit to the City Attorney.  They actually stayed late on a Friday night so we could proceed on Saturday.  This was done mid May.

Once we had the [Landmark Approval] letter in hand, we contacted Skyscraper Cranes of SF.  They did a site survey and gave me an estimate.  I approved the estimate and we set a date.  Although the Siren weighs only 6000 pounds, it took a 75 ton crane to remove it.  This was due to the fact we had to reach over some tall trees to hook on to it.  It took myself and my crew about three hours to remove the wiring and unbolt it from the roof.

We set it down on a trailer and took it to my shop.  Like a kid with a new toy, we began that day inspecting it.  On eBay, I found an original owners manual for the siren.  What are the chances of that?  We found the siren was intact, but the engine had serious damage due to the freeze in the Oakland Hills in the early 70’s.  We had to repair the block and replace the cylinder heads.  We then found a replacement fluid drive as the existing unit was not serviceable.

In just two short months, Jack Schroll did his very first “run up” of the siren on July 4, 2007.   The siren debuted later that summer to a huge audience, and has been part of the performance art scene ever since.

Schroll continues to make sure all the mechanical aspects of the siren work well, and has plans to work on the outside cosmetics too.  But it’s all about that sound, that remarkable siren blast.

More info:   Find out where the Oakland Victory Siren has appeared, it will surprise you –  Oakland’s Victory Siren Comes To Life.