We just learned that Dunsmuir-Hellman Estate will shift operations from a non-profit group to direct city oversight.  Knowing how our cash-strapped city has been cutting back on cultural and park resources, we’re extremely worried this special place will get mothballed.

Like so many places, Dunsmuir has been challenged by the recession.  While owned by the City of Oakland, an independent non-profit organization has managed the estate for decades.  There are weddings and events booked this year and next, but not enough to pay $380k in annual operating costs required for estate upkeep.

Over the past 40 years, the estate has figured into the traditions of East Bay residents.  Well-known Christmas celebrations takes place through December, when the mansion gets decorated to the hilt and plays host to tours, teas and Santa Claus.  It’s part of our cultural fabric!

We’re pretty depressed about Dunsmuir’s change of control, as reins get handed to Oakland Parks and Recreation now.  We know that our city administrators and elected officials can’t wave a magic wand and support the estate.  Are there any white knights in shining armor out there?

Last Tuesday eve, we switched to the Oakland City Council’s marathon meeting on Channel 10.  When the subject of local park projects came up for review, it felt like we were watching the Council resolve their schoolyard dispute live.

The Council approved resolutions to submit eight park projects for external grants.  Let’s rewind back to the original resolutions, beginning with seven projects nominated by district.  The process leading to approvals showed the balancing act between district and city-wide priorities. 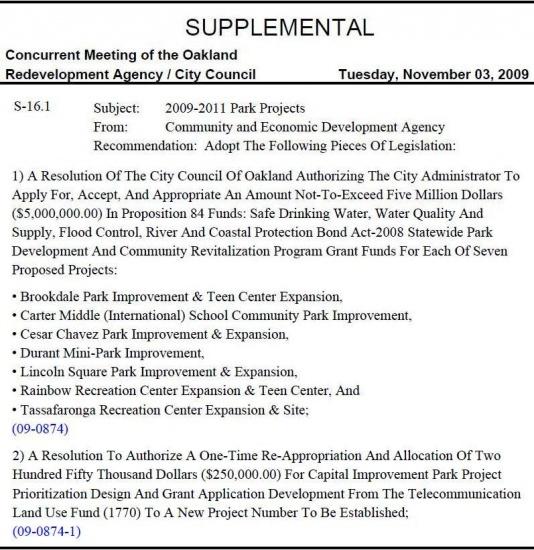 Which projects would get funded? Well, no one knows ahead of time.  To keep things equitable, Council reps had decided to recommend one favored project for their respective districts.  Like any major metro, Oakland has a reasonable shot at receiving external funds for some park improvements.

Could another project be added? At the Council meeting, a handful of impassioned residents spoke about the need for a second West Oakland project:  a teen center.  They claimed that kids would stay out of trouble with somewhere to go, and it was hard to argue with the request at face value.

What process should Council follow? The schoolyard confusion began in earnest when Council Rep Nancy Nadel wanted to add this project in her district.  At-large Rep Rebecca Kaplan said that she never recommended a project before, and supported this new teen center.  Larry Reid protested repeatedly because the rules had changed in the game, and he had other projects that mattered too.

When could projects expand? There was some back-and-forth about combining the two West Oakland projects together. Yet that was scratched when a city staffer explained the grant process required projects to be located on contiguous property.

It was getting late.  Council Prez Jane Brunner said “enough” and the resolutions were passed:  five yeas; one nay; one abstention; one absence.  Despite schoolyard jealousy, eight projects made this final list.

Now the real work begins with a bevy of community meetings and project planning preps ahead – all required to improve Oakland’s odds at winning a capital infusion.

Right now, the City of Oakland is making all kinds of news with our budget shortfalls.  Like every major metro area, we are dealing with huge gaps and have to get to some final and solvent budget.

Mayor Ron Dellums’ first shot has been poured over and worked through by the City Council.  Beyond the big nut with police funding, four Council representatives have recommended many, many changes – including some civic-minded things that are now budgeted.

We’re betting that you didn’t look at what our council rep, Jean Quan, and her colleagues adjusted in their budget.  It seems like Montclarions are so fed up that even paying attention to the shortfalls and responses can be headache-inducing, but some of our hot-button issues have been addressed:

What’s next?  The “first reading of the ordinances” takes place this Tuesday, June 16th at 6pm, in the City Council chambers.  This means the Council’s budget motion is reviewed at that session.  There’s a second reading scheduled for June 30th, which would include revisions and changes.

Meanwhile, the wheels spin slowly but sometime the budget does have to get done – even without clear understanding of the impacts from federal, state and county levels.