After watching Oakland Mayor Ron Dellums deliver his annual address this evening, we know he needs a better speechwriter or at least some practice time beforehand.  The Mayor rambled from grandiose goals to program details, and back again.  He highlighted the grant money hunt and barely pointed to the elephant in the room – the tough budget cuts and potential taxes ahead. 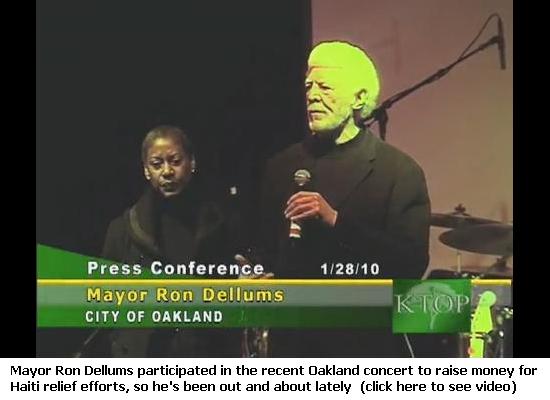 The most cringe-worthy moments arrived when Mayor Dellums uttered the words  “model” or “model city.”  We regret not keeping a running tally, but estimate at least 50 times or so.  Not surprisingly, he escalated to “the model city is our destiny” at the wrap.

On the flip side, we liked when Dellums threw out hella-love for Oakland because that’s what a mayor should do.  One highlight was when he bragged about our new-found restaurant hipness, declaring that “Oakland is nobody’s country cousin.”  Here, here!

We trust our first impressions, so here are address highlights:

Since Mayor Dellums doesn’t do public appearances that often, we relished watching his very long address on KTOP (Channel 10) this evening.  He should have quit while he was ahead rhetorically, rather than develop a supremely bad case of logorrhea.

You probably missed this!  Earlier today, Mayor Ron Dellums appeared on NPR’s Tell Me More.  We caught this national radio interview because KALW aired the program in its noon slot.  You can still listen to the 12-minute podcast, where he makes his pitch for Oakland.

If the goal is to get our fair share of federal funds, then some national exposure supports the cause – and the Mayor hammered the need for jobs, jobs and more jobs.  “We have to invest in infrastructure, education, health care and research,” said Dellums.  “In solving the problems, you generate employment.”

We smiled when reporter Martin asked if the Mayor wanted to join the Obama administration.  “I have a job and it’s a very taxing job,” said Dellums.  “I’m trying to paint a vision for Oakland coming together.”  Of course, his plan is to bring federal dollars to the model city.