Germany, Oakland?  At least last weekend, German transplants and their heirs showed up at Dunsmuir to honor their roots.  There was a full-on celebration with dancing, flag waving, and local clubs in attendance.  The brats, sauerkraut and beers were plentiful too.

The 79th Annual German Fest was large enough that a German diplomat made a quick and unofficial appearance.  He marveled at the beers ‘n brats love from Americans and wanted to set the record straight.  Apparently Octoberfests are not, in fact, something that most Germans celebrate at all.  The Bavarian Germans are into them, along with Americans. 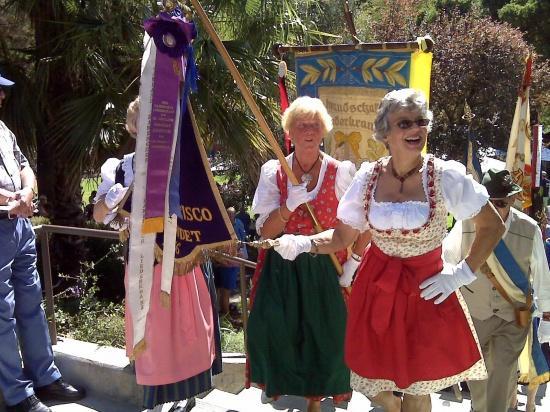 The main ceremony was something called a Fahneneinmarsch, or Flag Parade, where folks marched up the stairs and were acknowledged by all – like these ladies in dirndle-inspired garb.  We don’t think anyone in Germany wears this stuff anymore, right?

The dance troupe exceeded our expectations (!) and performed all kinds of traditional numbers.  My favorite was the dance featuring one man and two women vying for his attention, with one winning the prize.  It was entertaining to watch these evergreen performers and their kids.

Just to prevent cognitive dissonance, the flag bearers put California, the USA and Germany on equal footing.  The Alpiner band played the US and German national anthems too.  After all, the United German-American Societies of the East Bay (UGAS) organized the festival.

Where is Germany, Oakland? Around Oakland, there are vestiges of the settlers.  The German Tourist Club is a long-standing group which seeks to “foster, perpetuate and preserve the European Alpine social activities, cultural heritage and customs.”  The Club also holds a Biergartenfest every year in the “Oakland Alps,” at their Butters Drive clubhouse.

You also can’t miss the Altenheim, that grand old building on MacArthur Blvd.  The building has been well-renovated and recently celebrated 100 years on the hill.  There’s low-cost senior housing there now, and plans for more units.

The Excelsior German Center, which runs the Altenheim, has a much larger mission to encourage cultural and educational connections with Germany.  They run German language classes and have a library there.  According to Excelsior’s president, Michael Willis, there are some interesting plans afoot – so it’s not all beers ‘n brats really.