As you may know, alphorn players are unofficially part of Oakland’s Running Festival experience.  After running some ten miles uphill, the marathoners are welcomed to their Montclair high-point by several Riccola-like players.  We didn’t see photographic proof until now, a week later. 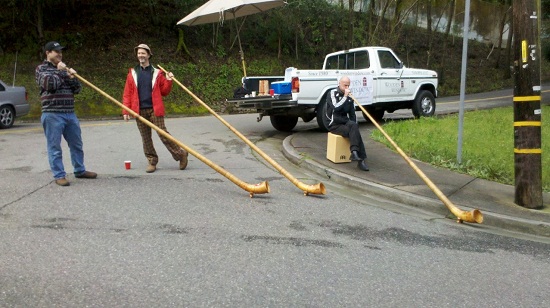 One runner, whose blogger alias is XLMIC, stopped in her tracks and captured the experience:

Then I heard these guys!  How could I not stop and take a picture?  This was in the middle of a moderate hill that felt like freaking the Alps.  [I] appreciate that I stopped and took a pic for the blog ‘cuz starting again was so hard.

Given our Germanic heritage in Oakland, we’re not too surprised by this Montclair quorum of players.  Since hearing about the alphorn greeting during the inaugural 2010 marathon, we hoped for and were pleased by this encore performance.

P.S.  In an enlarged image, you can see the Wooden Window support truck behind the players.  We first noticed these restorer-contractors at last year’s Greening Oakland Homes fair — and they clearly respect local tradition.

One thought on “Proof of Alphorns”