This unpleasant piece of news just arrived from Susan Piper.

“Just two weeks before the 19th anniversary of the 1991 Oakland Hills Firestorm, vandals cut 8 bronze branches off of the metal sculpture in the Oakland Firestorm Garden dedicated to the victims and survivors of what was at the time the worst urban disaster in US history. On October 21, 1991, 25 people died and 3500 homes were destroyed as a result of a firestorm on that hot, windy day. 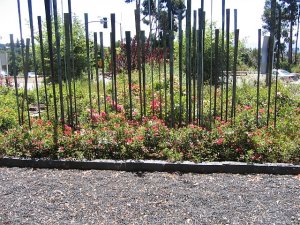 “This is like dancing on the grave of the fire victims,” said Gordon Piper, chair of the Oakland Landscape Committee who raised the funds and coordinated the volunteers who installed the garden in 1993. The sculpture depicts the scorched trees and new growth that graced the fire zone in the years following the disaster.

“This isn’t the first time that vandals have removed the branches. But their greed is a desecration of the spirit and meaning of the sculpture and garden,” said Piper

The Oakland Landscape Committee is accepting donations to cover the cost of fabricating new custom designed branches to the sculpture, which was designed by Gail Fredell.  Checks should be made payable  to Friends of Oakland Park and Recreation and sent to 33 Hiller Drive, Oakland, CA 94618.”