What killed the rainbow trout in Sausal Creek? At the beginning of August, city workers found dead trout in the creek not far from the culvert at Wellington Street. They found 25 in all, the largest was nine inches long. 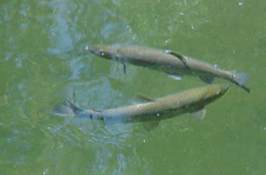 A federal lab in Charleston, South Carolina is investigating the cause of death. But until there are answers, Kimra McAfee, the executive director of Friends of Sausal Creek, wants to remind folks that the city’s riparian habitats are fragile. Tap water in our creeks can be lethal for fish.

What many people don’t realize is that tap water is disinfected with chloramine or chlorine, and both can be toxic to fish. Residual traces of chloramine at concentrations considered safe for human consumption remain in tap water. As aquarium owners know, chlorine dissipates into the atmosphere pretty rapidly, but chloramine combines chlorine with ammonia, and ammonia is very toxic to fish and doesn’t dissipate like chlorine. Consider, for example, the act of draining a swimming pool or Jacuzzi spa directly to a storm drain or a creek. Without first treating the water to remove traces of chlorine and ammonia, fish and other aquatic life in the creek could be harmed. – Kimra McAfee

McAfee said that the dead fish were found in only one location, and creek watchers have spotted healthy fish in other pools. Whatever killed the fish is out of the creek now.

This isn’t the first time there’s been a fish kill in Sausal Creek. In February 2008, runoff from a construction site killed 11 trout.

One thought on “Dead Trout Mystery in Sausal Creek”