On a whim, we went down to the U.S.S. Hornet yesterday afternoon.  Getting the full tour is  completely worth your time!  When you are guided by old steam room workers and fighter pilots, active on similar-class ships during Vietnam, the experience comes alive.

You don’t need to be a war or ship buff to appreciate the magnitude of this vessel.  After walking below deck for a couple hours, it’s hard to imagine being stuck there for months.  One of the tour guides had worked six-hour shifts – that’s six hours on, six hours off – in the steam rooms.  Even without war-time threats to life and limb, we’re impressed.

The other guide had been a top-gun type, looking fit and ready to pilot a jet right now.  He showed us what took place throughout the upper tower, where the ship captain and flight controllers performed their duties.  We marveled at what it took to ensure that different sized-jets could take off or land safely, out in the middle of the Pacific Ocean.

By combining two walking tours, you’ll get a bead on how things operated on commissioned ships.  We checked out an engine room, the kitchen and mess hall, marines-only munitions storage, a six-man brig and catapult operations below deck.  Above these warrens, we toured the ship’s bridge, air traffic control area, and ultra-windy flight deck.

Like all good tourists, we have to share some photos taken there – which can’t replace visiting in person!  Fortunately, the Hornet Museum operates with a large volunteer force who mans the vessel seven days a week, from 10am – 5pm.  Admission runs from $6/kid (ages 5-17) to $14/adult, and helps refurbish this military treasure. 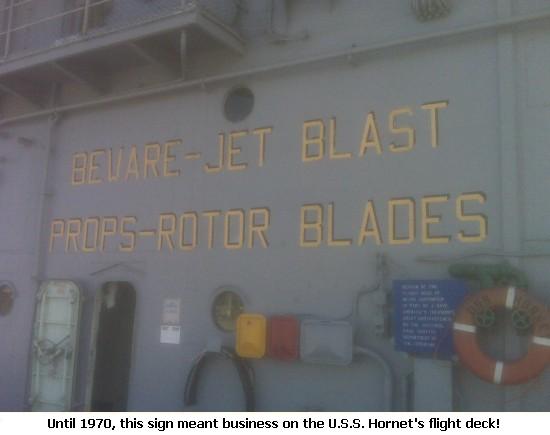 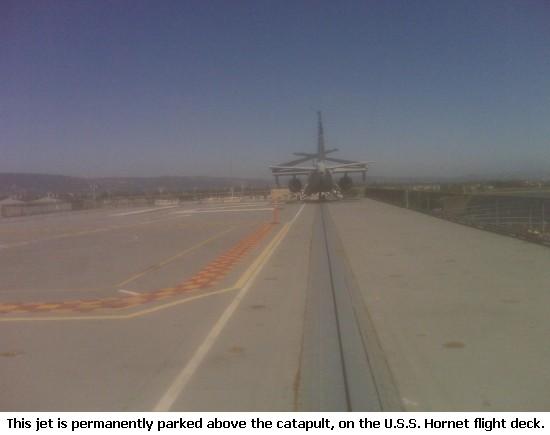