The Bay Bridge’s seismic retrofit will be part of our lives for, oh, another five years or so.  However you just can’t see very much from the current bridge, ground or air.

How about the water?  Montclarion Nancy Lane snapped some terrific photos while day cruising around the Bay and Bay Bridge, and shared them with us.  Check them out!

“Bridge Underway” – This first image shows the new bridge working its way across the Bay, and there’s quite a distance until it reaches shore.  It still looks nice and sleek, as opposed the the train-trestle style of the old model.

“Bridges Meet” – This is a really cool perspective, since the old and new bridges seem to bear down and connect into infinity.  You have to like the optical illusion shots like this one.

“Bridge Beauty” – Yes, the new bridge is quite sleek and looks like it will last into the 22nd century.   This eastern span opens to the sky, both coming and going – which we think will change perceptions of the East Bay. 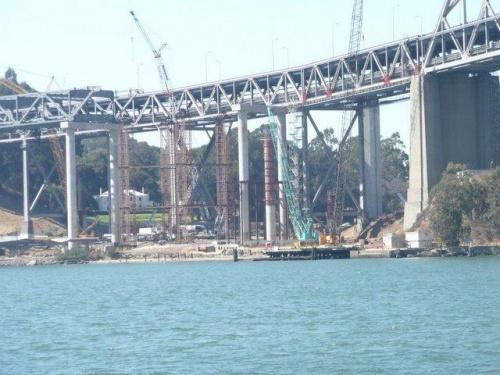 “Bridge Erector Set” – The bridge and bypass construction is massive, and it’s good to zoom into this bite-sized section with plenty of cranes and gear.  We’re wondering where the workers are milling around, though.

Thanks again to Nancy for sharing these images of the Bridge under construction.  We would love to tour the Bay ourselves and see what progress has been made since she snapped them last fall – anyone with a boat and captain handy?